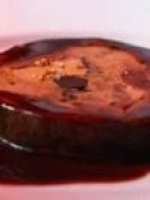 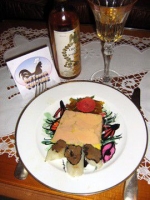 Others recipes from Pâté and terrine 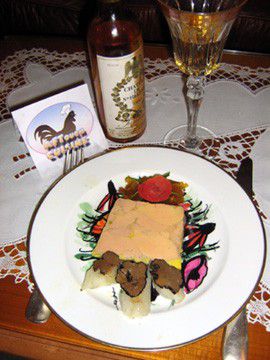 1) Remove the veins of the foie gras.
2) Put the 2 lobes into a salad bowl, season them with salt and pepper and pour a swig of wine between each layer, and then cover the bowl with a cling film and keep it into the fridge during a minimum of one night.

The day of cooking :

1) Pre-heat the oven (300°F)
2) in the bottom of a china terrine, first put the big lobe (round/external part below then put the rest of the liver above arranging in a quincunx up to the top, then smooth out with an iron spatula and cover with the lid.
3) Fill a baking tray with very hot water on the bottom of which you have first put a sheet of a newspaper (to avoid bubbles when water is boiling) and put the terrine on it (1/3 of the terrine must be in water).

1) Have a look after the first 35 minutes : when the foie gras had rendered enough fat for covering it, the cooking is ended.
You then need to transfer the terrine directly into chilled water (in a basin full of cold water and ice in such a quantity that the level of the water terrine must be at the 3/4 of the height of the terrine) and leave it in water during 15 minutes (the fat of the liver will then be blocked and the cooking stopped very shortly.

On the picture, this duck foie gras is served with slices of Jerusalem artichokes and of fresh black truffles ...